From 27 to 30 October 2020, the best young talents in the profession of electronics technician EFZ took place in the swiss championships to put their vocational skills under proof. During four days the participants had to draw sophisticated circuits, layout and assemble a printed circuit board, get a synthesizer running or write embedded software for microcontrollers. As a participant, I had the opportunity to experience an unforgettable week at the championships, as well as an eventful qualification procedure.

It all began almost a year ago when the call for SwissSkills applications was published by Swissmem. A certain amount of time passed until finally in March of this year the documents for the upcoming qualification procedure were sent. To qualify, applicants had to prepare a self-presentation and a homework assignment called «Five Pointed Star». This homework included drawing the schematic, layouting and assembling the circuit board and writing software for a star with five points and thirty RGB LEDs of type WS2812B-2020, all kept as small as possible. In addition to a microcontroller, there also had to be an acceleration and ambient light sensor on the star. One of the three tasks was to make the LEDs shine in random colours when the star was moved. I personally took great pleasure in carrying out this quite challenging homework. 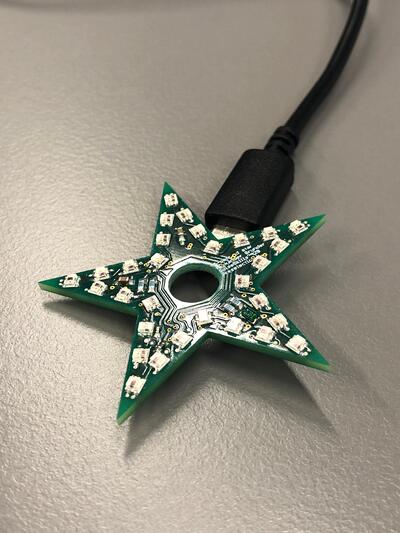 The qualification event, somewhat delayed by Covid-19 pandemic, took place at the beginning of July in Bern. In addition to the self-presentation and the presentation of the Five Pointed Star homework, all 65 registered candidates were assessed for their suitability in an extensive personality test. There was also an interview with experts and an online test on all areas of electronics, called Safecracker, which put the candidates' knowledge to the test. I gave everything and tried to cleverly answer the traps set for me in the interview and in the technical questions, therefore I was dead tired at the end of the day. However, my joy was all the greater when a few days later I received a letter with the news that I had passed the qualification procedure and was one of the twelve qualified participants at the SwissSkills Championships 2020. Now, an exciting preparation time began!

In addition to all the theory, good hardware and measuring equipment is of course also required. Computer Controls supported me very generously with the Keysight oscilloscope DSOX1204G for use during the championship. Especially practical with this oscilloscope is the built-in function generator which firstly saves a lot of space to a separate device and secondly offers the possibility to make BODE diagrams directly on the scope. This function can be easily tested, for example with a small filter circuit (passive RC bandlimit example).

In this case channel 1 is connected to the input of the filter and the internal function generator of the oscilloscope, channel 2 is connected to the output of the filter. If the BODE plot is now started, the oscilloscope sweeps through the set frequency range and displays gain and phase depending on the frequency. With a practical cursor each measuring point can be analysed. As you can see the scope reproduces the typical bathtub shape (gain) of the bandlimit. The centre frequency can now be read out with the cursor and in this case be checked with the following formula:

Also very useful is the built in decoding function of signals from a serial interface to check the communication between two endpoints. However, for the SwissSkills I not only packed the fantastic oscilloscope but also various other equipment like pliers, tweezers, screwdrivers, soldering stations, multimeters, an ESD mat, laboratory cables and of course a laptop with software for layouting and coding. It was quite a lot, but in the end everything fitted into a big suitcase.

Equipment and material laid out on a table

Now I was ready and on 26 October I travelled to Lucerne, where this year's SwissSkills for electronic technicians were held in a decentralised manner at the company Schindler. On the same day, the Worktables were set up in the competition area, which was located in the middle of Schindler's mechanical production. A little later the candidates were welcomed by the experts in a briefing and the current world champion in electronics Florian Baumgartner held a presentation about his way to the WorldSkills 2019 in Kazan. That was a unique and exclusive experience to meet the world champion Florian and to have the opportunity to ask him questions. After the check-in at the hotel and a delicious dinner it was time to rest and be fit for the championships the next day.

The first day of the competition was all about hardware design in terms of schematic drawing and PCB layouting. The goal was to build an ESP32 development board with additional peripheral components. Pushbuttons which are normally digital had to be read in analogue to save input pins with as few components as possible. A piezo buzzer had to beep with three different frequencies on different actions, all managed by the hardware. There had also to be integrated many other components such as an infrared interface and a TFT display. Finally, at the end of the day, as many assemblies as possible had to be implemented in the schematics and layout. Then the Gerber data was collected, and the circuit board was then sent to the producer for etching so that it could be assembled in two days.

On day two the morning was again about hardware design, but this time in the sense of prototyping on breadboards. For a synthesiser, which was limited in its function, analogue filters, signal generators for triangle and rectangle with simple components and a tone glider had to be drawn by hand, constructed on breadboards with a limited amount of parts and function validated with the scope. In the afternoon there was the first software task. This was solved by bringing along a microcontroller system whose interfaces were known in advance. The synthesiser could be controlled via an SPI interface. A menu control was implemented on an LCD display to play scales and play songs from a flash memory. Additionally, MIDI-Keyboard UART signals had to be processed and the sounds had to be sent to the synthesizer as if playing the piano. That was great fun!

In action with the scope

Day three started with the task fault finding and measurements. A sigma-delta ADC had been built with numerous operational amplifiers and counter ICs. The aim was to find as many built-in errors as possible to correct them immediately in order to be able to start up the system, which included measuring the anti-aliasing filter, setting the oversampling frequency and a general functionality test. Here, the frequency response analysis of the oscilloscope DSOX1204G came in handy. Later that day we received our printed circuit board from the hardware design task to assemble it. Now it came out whether one had made a mistake during the layout which now became noticeable on the circuit board. I was relieved when I was able to get the circuit board running right away.

In the morning of day four, the last mission started. It was the second embedded software programming task. The challenge here was that all peripherals were connected via IO-expanders, which were controlled via the serial interface I2C. A joystick was the main input to the board, there was also an LED matrix and an LCD for which various sub-tasks were created. For example, one task required a smiley to be displayed on the LED matrix, the mood of which depended on the joystick position, from a very sad smiley to an overjoyed one. And probably the hardest task of all, in relation to the text display task on the LCD, was to program the game snake on the LED matrix!

By solving the tasks under constant time pressure, it felt like the week had just flown by. Finally, everything was accomplished, and we candidates waited curiously for the announcement of our rank. Then, the time had come, and the award ceremony began... I am very proud that I was able to fight my way up to the 10th place of all electronics technician trainees in Switzerland. At this point I would like to thank Computer Controls for their support, which made my successful participation possible! The SwissSkills event, the tasks and the exchange with the other candidates were a formative experience for me, which I will never forget.

How CMSIS Technology Works [And Why it Makes Our Lives Easier]

How to Keep Your True-Wireless Earbuds Cool